Varanasi – the Eternal City, and spiritual capital of the Hindu faith – is turning Smart. By means of massive developmental projects powered by Smart Initiatives of technology- the city got launched into the ‘Smart’ journey by none other than Prime Minister Narendra Modi, who on July 15th, inaugurated, as well as laid foundation stones for projects worth over ₹ 1,500 crore. The interesting facet of the inspiring saga is the stakes that the AV industry got from it. SI India dedicatedly, wants to highlight those aspects while celebrating the spiritual city’s Smart journey into the future.

Thursday, 15, July, 2021, marks a special day in the annals of Varanasi as the ‘Eternal City’ – that the spiritual capital of the country is revered with – made a major stride in its journey towards the coveted Smart City status.

Prime Minister Narendra Modi inaugurated and laid foundation stones for development projects in the city of his constituency worth over ₹ 1,500 crore. While inaugurating already completed projects worth ₹ 744 crore – that included the prestigiously built ₹ 186-crore International Cooperation & Convention Centre – he also laid foundation stones for several projects and public works worth about ₹ 839 crore.

The other inauguration included the Centre for Skill and Technical Support for Central Institute of Petrochemical Engineering and Technology (CIPET).

Among all the projects that the Prime Minister inaugurated, two projects are of particular significance as far as the audio-visual industry stakes are concerned: The International Cooperation & Convention Centre, and the giant LED screens erected at as many as six different places in the city, including the ghats.

The VICCC is a unique venue in its own right. An architectural fruition of Indo-Japanese friendship, and more particularly, the cordial relationship that Modi had maintained with former Japanese Premier Shinzo Abe – who, during his tenure in December 2015 visited Varanasi, and promised to lend the Kyoto expertise to create an iconic model of India’s cultural richness – the venue is a veritable blend of sophistication and spiritualism.
The venue is created with the full assistance of know-how and expertise from The Japan International Cooperation Agency.

Named Rudraksh (the eye of Rudra or Lord Shiva) – the eco-friendly, intelligent building fit for Level-3 of Green Rating for Integrated Habitat Assessment (GRIHA) – has its roof shaped in the form of Shiva Linga (a metaphysical symbol for union of mind and soul), and studded with as many as 108 panchmukhi (five-sided) Rudrakshas, moulded in aluminum.

The two-storey ensemble seated on a 2.87-hectare site is characterized by a grand, multipurpose entrance lobby and a swanky and spacious pre-function area that connect to dedicated Meeting and Conference Rooms which can as well be used as Art Galleries.

The entrance itself has three different entry points meant for regular visitors; a service entrance for admin and support staff; and a dedicated VIP entrance, making it an ideal destination for holding all types of international events.

The highlight of the venue, however, is the grand auditorium built with a seating capacity of 1200 people, and steeped in design exquisiteness and technology innovation. A well- equipped stage to suit diverse theatrical and performance arts, and concerts, as well as large size conventions and symposiums glow in the backdrop of fool-proof security and safety mechanisms.

Overall, a new architectural marvel with well-defined AV/ICT systems, has come to elevate the iconic identity of Varanasi. 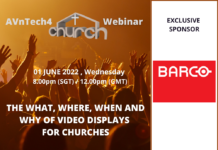 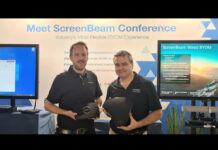 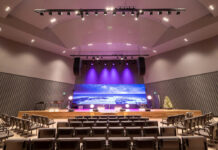