NovaStar has served as the nominated supplier for the past 14 years since the 2008 Beijing Olympic games. As a global leading LED display solution provider, NovaStar continued to complete a successful and stunning project for the 2022 Olympic and Paralympic winter games. 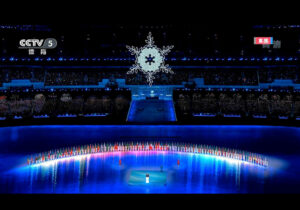 Behind the ultimate visual experience, is the power of technology that created many world-class innovations. NovaStar’s video server, video splicer, single-port-8K controller and more than 100,000 receiving cards provided full link display solutions for the floor screen, ice screen, torch screen, outdoor 8K live screen and all LED displays. They also provided the world’s largest LED display system with the most complex design, the most accurate operation and the most secure backup control system.

Meanwhile, the single-port-8K control technology helped the opening ceremony become the first large-scale application of 8K technology in the world. Live broadcast of the opening ceremony, and coverage of the main competitions, with 8K control technology support for more than twenty 8K LED display giant screens in China was provided by NovaStar. Viewers could feel the Ultra-HD visual experience brought by the 8K live broadcast even if they were not on site. 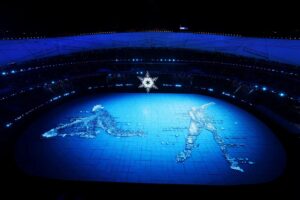 Each display cabinet adopted the double receiving card backup design and was divided into four network ports, which were primary, secondary, primary loop and secondary loop. When the input of the primary network and port of the primary card is abnormal, the other three signals can be replaced in order of their priorities. The interfaces of the primary, secondary, primary loop and secondary loop of the receiving card are respectively connected to 4 controllers to realize the multi-device-backup of the entire system.

There is a group of professionals behind every visual feast of NovaStar. The FAE (Field Application Engineer) of the Olympic project, Jingfeng Chen said, “The moment when I got the mission statement, I felt a great responsibility and only until the closing of the Winter Paralympic Games did I feel that the task is finally completed. I belonged to the security team and stayed on-site for six months. From the very beginning of the construction, our team entered the site to support, until the closing of the game, we served the Olympics as a team and delivered our professional services. I always tell my teammates ‘We are a team! Together, we can do better.”

“With the closing of the Winter Paralympic Games, I felt relieved cause the project was finally finished, and the heavy responsibility and burden were diminished. In the past six months, our R&D partners have been supporting us remotely at all times. They even came to the site to support us whenever necessary. This made me feel the values of NovaStar: always put the requests of our client first and always deliver professional service in a client-centric way.”

“In the controller part, we also adopt the scenario redundancy design and redundant backup of primary and secondary input sources. The switching process of each channel supports seamless switching, to realize the smooth, safe and reliable operation of a large and complex display system,” said Mr Chen. 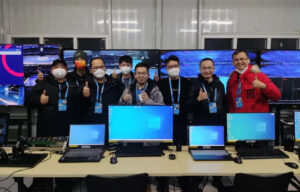 The people in NovaStar are the precious assets as pearls in the sea. Such significant and epoch-making projects are still going on in NovaStar today. Every NovaStar product is designed and built with six main principles in mind: innovation, stability, security, power, ease of use and customer service. This is why NovaStar products are used all around the world and trusted for huge events such as the 2008 Beijing Olympic Games, the World Cup, and WWE. From the smallest event to the world’s greatest stages, NovaStar’s LED display control systems set the industry standard for excellence. Meanwhile, NovaStar is one of the most trustworthy partners for clients in the visual world as they offer reliable one-stop solutions and cutting-edge technologies as always.

This is a sponsored article by NovaStar.