To boil it down, Extended Reality (XR) is a collective term in live production, combining Augmented (AR), Virtual (VR), and Mixed Reality (MR) elements to extend the physical reality we live in and blend the digital and “real” worlds in an immersive way.

Big names from the Indonesian TV and film industry, including YouTubers and local content creators, were in the audience for V2’s seminar. The event was opened by shout-outs from key figures in the Indonesian technology and entertainment industry, from presenter and R66 Media CEO Helmy Yahya, Titans Tech co-founder Belinda Luis, to filmmaker and producer Indra Yudhistira.

“When it comes to business, we believe that the future will be XR,” Belinda said. “It will bring us, the consumers, and the audience closer to whatever it is that we want to display.”

“Extended reality is a game-changer because it can combine virtual production, augmented reality and mixed reality into one process,” Indra said. “Hopefully, filmmakers, showrunners and other creative players can utilize this XR and turn their vision into reality,” he added.

From the set-up alone, it was apparent that V2 Indonesia meant business: Four big TV screens adorned the room in addition to the huge LED screens facing the audience. V2 CEO Rudi Hidayat stood in front of these LED screens to start off the seminar, showing the impressive scale of the XR live quality to the audience and those watching at home. In the livestream video broadcast on YouTube and the in-room monitors, Rudi could be seen standing in a bright, sunny forest. Big trees and bushes surrounded him in a realistic setting, visible in real-time.

“Business-wise, XR has already become quite a revolution in the entertainment world across the globe,” said Rudi. Data shows that in 2019, the XR business was only worth under 20 billion dollars, but in 2022 it has skyrocketed over 209 billion dollars.
Rudi believed that XR would be the gateway to the “metaverse” (virtual world). Its importance, however, applies to many things: broadcasting world will benefit greatly from XR studios’ virtual setting; movies created with XR will allow less crew, less travel and less time on set; school and university students can experience realistic scenarios and have a more hands-on learning in a simulating XR virtual environment, and the list goes on. Not to mention the obvious and current fields in which virtual reality is greatly used, like esports games, live music, or corporate events.

This IMXR studios from V2 Indonesia will be supported by Liantronics LED and Macroblock MBI5264 LED Driver, which produces a refresh rate of 7680 Hz, superior even to the realistic LED used for the seminar that only has a 3840 Hz refresh rate. V2 Indonesia is also using a newly launched Novastar processor with a 240 Hz framerate, four times greater than the usual LEDs.

Perhaps such dedication and scale were the ones that made the Indonesian State Film Productions (PFN) to back V2 Indonesia in their launch of the country’s first XR studio, which will be officially opened on May 20 this year.

“We need to collaborate, like Avengers, because you all have different things from us, different talents, different abilities. Let’s collaborate, whoever you are, whether you are a content creator, a venue owner, a producer, a director, and so on,” Rudi Hidayat said.

However, the seminar did not stop at a mere promotional event for V2. Following Rudi, Aldo Rambie from Meta Indonesia also came onstage. As the Vertical Lead and representative of Meta (Facebook’s new name), Aldo explained the big metaverse market that awaits in the country.

“The blueprint is there, and the map is already laid out for metaverse [in Indonesia],” Aldo said.

Facebook changed its name to Meta in October 2021, and since then, the whole tech industry and beyond have never stopped talking about the metaverse. But Meta is still building that virtual world—they have invested US$150 million to propel the metaverse’s acceleration in the next 3 years. While not yet constructed as a whole, glimpses of metaverse can already be seen in today’s world, from social media AR filters to Zoom interactions.

“Interestingly, Indonesia is the country with the most AR developers in the world,” Aldo shared.

Nicholas Chan, disguise Regional Manager for Southeast Asia, then came on stage after Aldo. Showing disguise’s achievements to the audience, Nicholas proved the company’s brand and legacy as a frontrunner in the XR business. He reminded the audience that XR is still pretty new—only 2.5 to 3 years old, but its growth is remarkably rapid.

“In Southeast Asia alone, there are now about 15 XR stages,” he said.

Nicholas believed that the metaverse is the next evolution of the internet. NFTs, blockchain, and other virtual items are also going to be in the metaverse because the concept of buying assets in the virtual world is not a new thing anymore. This is especially true in Indonesia where it has seen a mainstream rise in NFT and blockchain, with various influencers popping here and there.

Asked about disguise’s decision to direct its market to Indonesia, Nicholas said it was just the most obvious thing to do.

“Indonesia is a part of the G20, for one. Just in terms of scale, Indonesia is huge. [They’re] massive compared to other countries in Southeast, and the movie industry here is huge,” he said. “I’ve always been talking to people like Netflix and Amazon, and they’re seriously thinking of investing in more Southeast Asia contents. So of all the countries in SEA, who do you think would be the interesting ones?” Nicholas asked matter-of-factly.

“Now, thanks to V2 for bringing in disguise, there’s going to be some amazing things created in this space,” he added.

disguise Tech Solutions Specialist Gaven Lim also demonstrated how the live XR showcase works to the audience, showing the capacity of the cutting-edge LED volumes for the seminar and hinting at the full power of V2’s upcoming XR studio, which will have twice the capacity of the LED in this event.

“We’re doing an XR studio, and the most expensive part, normally, is the LEDs. It’s more expensive than disguise. It’s true!” Nicholas laughed. With Rudi’s decades of experience in digital technology, it seemed to him that both companies were just meant to be. “It just became a perfect fit because you can’t really do XR without LEDs, and he’s supplying the most important part. So having a partner who really understands how LED works just makes sense,” Nicholas added.

Rudi did not forget to give his thanks to the State Film Productions (PFN) as the seminar ended.

“PFN, as we know, is the aggregator of Indonesia’s film industry and ecosystem,” he said. “We assured PFN that we will provide the best infrastructure, studio, tools, and latest technology,” he added.

If (or when) all goes to plan and the XR studios hit it big, V2 Indonesia has planned to turn IMXR into a franchise with numerous branch studios across the country, further decentralizing the technology and giving access to many content creators. Though the journey is still far ahead, V2 seems to already have one foot in the future.

This article is written by journalist Radhiyya Indra. 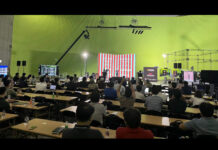 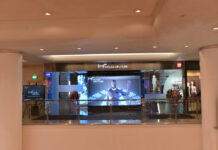 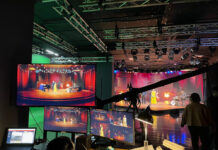