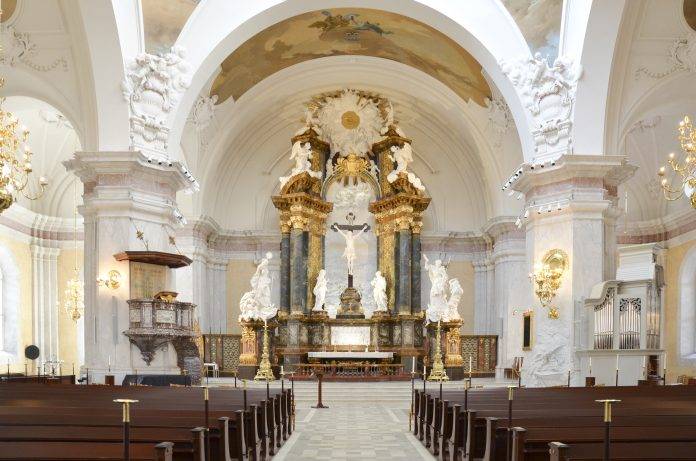 One of the largest and most beautiful of Stockholm’s churches, the Gustav Vasa Kyrka, in the city’s Vasastaden district, carried out a major refurbishment and technical upgrade. As one would expect of such an edifice, when it comes to technical systems the church has quite specific aesthetic preferences.

And for sound reinforcement, meeting these requirements is complicated further by the physical and acoustical reality of the building itself.

The Gustav Vasa Kyrka was designed by August Lindegren and completed in 1906, with a
capacity of up to 1,200 worshippers, generations of whom have no doubt marvelled at the lavishly decorated marble surfaces, and soaring arches.

They also can’t have failed to notice the remarkable reverberation time.

Jacob Julin of Soundcop, the company brought in to solve the church’s intelligibility woes,
said, “The acoustics was the biggest challenge. When we started, the hall had an acoustic
reverberation of 6 seconds, so that was of course an issue.”

Later however, following the building’s refurbishment, including new treatments to the floor and walls, that reverb time had risen to 7.5 seconds. Julin continued, “The worst of the reverberation is between 300-500 Hz, so it is possible to improve it with a little bit of system trim, but the reverberation is very long in full frequency as well.”

Representing Svenska Kyrkan, Facilities Manager Urban Paulander said, “… What we wanted was a system which would make speech and music as clear as possible for all the
listeners in all areas of the church.”

Fortunately, d&b xC-Series column loudspeakers, which SoundCop had used successfully in
Stockholm’s Maria Magdalena church the year before, were well suited to the task.

Purchased via ARVA Trading, the d&b audiotechnik distributor for Sweden, their cardioid dispersion performance is key to reducing unwanted reflections and maximising intelligibility in spaces like this. Said Julin,

“The 24C was the obvious choice. I was worried that they wouldn’t cover the 19m throw distance to the delays, so that was a nervous point, but it worked. It worked straight away.”

Explaining his preference for the xC-Series, he said, “I listen through a lot of column
speakers, and there’s nothing good, absolutely nothing. Some use beam-steering and things like that, but most only give me a headache because they’re not phase coherent at all.”

“I’ve chosen xC-Series for a while now because it’s the only column speaker that actually sounds like a small PA for real. And it works.”

The finished installation consists of a left/right PA system, with one 24C cabinet per side,
plus two of the tiny d&b 4S cabinets pointing in towards the altar. Then there are 24Cs
pointing the same way as the PA, and 2 x 16C point back to the presenter’s position for
foldback.

“On one of the pillars there is an organ that is totally in the way of everything,” said Julin. “If we put a speaker there, no-one behind it would hear anything. So we made 80cm wall- mount arms to hold the speakers out on each side of the organ…”

Around the pillars 24C, 24C-E plus 4S cabinets from the xS-Series, cover from the balconies, with further 4S cabinets providing under-balcony fill, and further 16Cs for delays on the pillars further down the room. In addition, a separate system of 16Cs is installed in one of the side-chapels.

“Every speaker is on its own channel to allow us to time align everything. There are two DS10s to get the audio from Yamaha and Q-Sys via DANTE and distribute it via AES to the amps.”

The project’s aesthetic demands also made for a complex cabling installation, with Julin and his team running everything through precisely cut steel conduit, carefully tracing the ornate architectural features. “As there were a great deal of small angles needed for this, we had to more or less become plumbers to do it.” he said.

A QSC Q-SYS Core 500i processor gives connection to two touch screens – one by the priest’s position, allowing them to select their own microphone, and another at front-of-
house. “Here we have made very good use of the d&b plug-in for Q-SYS,” said Julin.

“It gives the user easy control of zones, by selecting areas of the room on a plan view map on the touchscreen. This mutes or unmutes the different areas.”

In total, around 30 loudspeakers are installed, mostly mounted on or near the 2 foremost pillars. 2 Q-SYS Page Stations are included for use in emergency evacuations, while a Yamaha QL1 digital console presides over the system at the front-of-house control position.

“All EQ and delay is done with d&b R1 remote control software,” says Julin. “The user has a
choice of controlling events either via the programmed touchscreen connected to the Q-SYS Core, or via the QL1.”

Urban Paulander was pleased with the result. He noted, “It’s a very good system – the sound is much, much better than before. The control interface is both advanced and simple, which is great because we have people in the staff with different levels of knowledge and interest in sound and mixing.”

“Quality-wise, the xC-Series loudspeakers were everything to this project. I don’t think it could have had that quality without that product, at least not with the visual
demands.”

“There was no way we could have used anything else – not that stays coherent,
anyway. In my next church project, I’m pretty sure I will do the same thing again, and again, because it really works.”