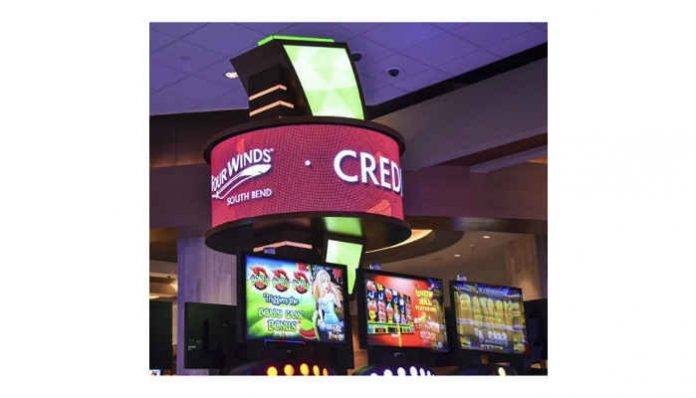 The new Four Winds Casino in South Bend, Indiana recently upgraded some of its internal wayfinding signage with two show-stopping 360-degree NanoLumens Nixel Series LED truly curved displays atop slot machines on the casino floor. According to Musa Balogun, the casino’s Director of Gaming Maintenance, the new curved displays are clearly visible from far away in most directions, making them the ideal solution to inform guests of ATM locations and assist in wayfinding.

“Fast, simple transactions are the lifeblood of a casino,” Balogun said. “When management recognized that guests sometimes had trouble finding ATMs or bill breaking machines, they knew we needed a solution that would replace the old static signage with a bright, large, eye-catching feature that is viewable from nearly all angles at all times.”

For maximum visibility, effectiveness and value, that meant using NanoLumens truly curved displays. The secret to NanoLumens’ display technology is the Nixel, the company’s patented flexible building block that comprises all NanoLumens Nixel Series displays. Most other manufacturers use the trick of angling small, flat LED panels at the connecting edges to create the illusion of a curve, while NanoLumens Nixels actually bend and flex to create both convex and concave curved displays. This makes the displays 100% seamless and provides superior aesthetics from 360 degrees, even viewed up close.

KGM Gaming, an innovative manufacturer and supplier of products that have groundbreaking impact on the gaming industry, was tasked with designing, building and installing the new display structures. After considering all digital display options, including using four LCD monitors at each site, it became clear that no other technology could rival the brightness, visibility, longevity, reliability and eye-catching nature of a 360-degree NanoLumens true-curved LED display.

According to Jack McNamara, VP Operations for Signage and Millwork at KGM Gaming, the result of the installation at Four Winds South Bend is pure eye candy that draws guests’ attention and ensures they are always aware of the nearest ATM location.

“In the casino world, it’s pretty much understood that bigger and brighter is better at attracting guests and ensuring a fun, enjoyable gaming experience,” McNamara said. “For projects like these, NanoLumens has become our go-to vendor because of the build quality, customer support, and ability to create unique, architectural designs that other display types and manufacturers simply can’t provide.”

McNamara said they mocked up several designs, including one that would have used four traditional LCD panels at each of the four ATM locations, but they didn’t provide true 360-degree visibility and couldn’t display the same kind of enticing visual that a circular display is capable of. KGM designed architectural signs that extend nearly to the ceiling, with the curved NanoLumens displays taking center stage and providing the casino owners a dynamic, exciting way to communicate with their guests. Each 5mm pixel pitch NanoLumens display is 1.5 feet tall with a diameter of 3.5 feet, making them the most clearly visible signs on the entire floor.

In addition to the attractiveness and wide visibility, NanoLumens LED displays also eliminate the need for bezels and grid lines that interrupt content and distract viewers. Because NanoLumens technology is lightweight, low power, low heat and warrantied down to the pixel for six full years, it is ideal for high-traffic, always-on environments like casino floors.

“The response from management and guests has been extremely positive,” Balogun added. “It’s now easier than ever to navigate the floor, get cash when you need to, and have a point of reference for getting around. Basically, it’s the next evolution of technology aiding casino floor management and traffic flow.” 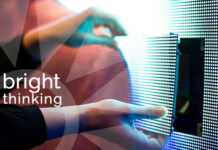 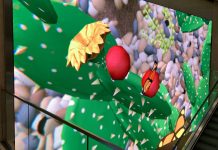 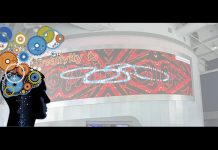 NanoLumens Invites the Industry to ‘Unbox Their Minds’