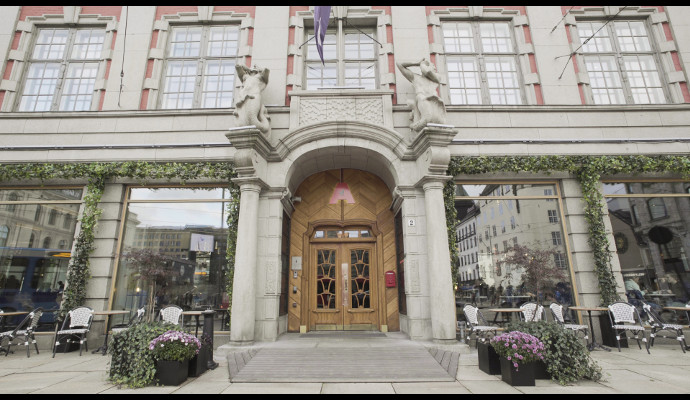 The Amerikalinjen building located in the most central and vibrant part of Oslo has a rich and colourful history. It was inaugurated in 1919 as the headquarters of the Norwegian America Line, a hugely successful passenger and freight shipping company that opened up the New World for hundreds of thousands of Norwegians.

100 years later the architectural landmark has been reborn as one of Oslo’s premier urban boutique hotels, complete with a comprehensive Genelec sound system supplied by Norwegian pro audio specialists, Benum.

Occupying some of Oslo’s most prime real estate, Amerikalinjen – owned by the Nordic Choice Hotels group – has retained all of its authenticity whilst providing today’s travellers with a thoroughly modern experience.

The remit was clear – Amerikalinjen wanted the best possible sound in all areas of the hotel, to match the rest of the high quality services and fittings. The requirement was for four separate areas: reception; the restaurant; the cocktail bar; and the beautifully luxuriant conservatory at the heart of the hotel. Everything should sound extraordinary.

“Genelec was a completely natural choice for this installation,” declared Ronald Hernes, Benum CEO who oversaw the Amerikalinjen project. “Firstly, the sound quality is second to none. Secondly, they are active speakers which are therefore easier to cable and install, and there is no need for an amp rack room. Finally, you know that once they are in, the client will have trouble-free service for years. There’s no doubt that, for a project of this calibre, Genelec ticks all the boxes.” 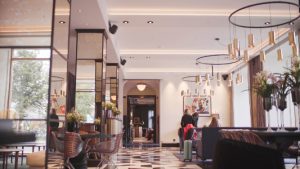 Nevertheless, he recalled that the mission was not without its challenges: “From an architectural point of view, the building is beautiful with lofty ceilings and large windows,” said Hernes. “It looks wonderful, but it’s not ideal when it comes to speaker placement. Our main concern was achieving the required coverage with such large volumes of space to cover. In the conservatory, we also had to think about the reflections off the glass roof. Fortunately there’s quite a lot of greenery which helps deaden the room a little.”

Benum suggested increasing the amount of loudspeakers in each area in order to achieve optimal coverage and sound quality even at low levels, yet still conserving sufficient headroom to be able to turn up the volume when required for a more party-like ambience. 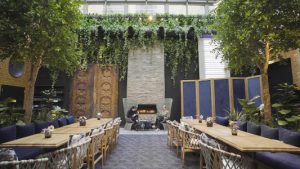 “We opted for eight of the larger 4030Cs in the cocktail bar to make sure they had enough power for the late-night crowd. For reception, the restaurant, and the conservatory ‘garden’ we used lots of 4020Cs. Each area also benefits from a pair of 7040A subwoofers (except reception which only has one) to provide a subtle, but critical boost to the low end without being too physically imposing.

In total we installed thirty-eight 4020Cs, eight 4030Cs and seven 7040A subs. Everything is on a Dante network distributed via an Allen & Heath dLive DM0 MixRack which is broken out into analogue at each zone via a Neutrik interface, and then to the loudspeakers via Sonifex active balanced splitters. 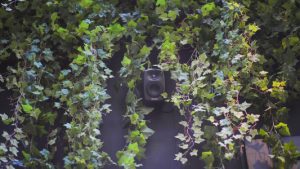 Each zone is equipped with an A&H IP1 network controller which gives local operators access to source selection and volume. Finally, we put an A&H IP6 in reception which provides control over multiple zones.” Wilhelm Hartwig, Amerikalinjen’s general manager, is delighted with the results.

“High quality audio, especially in the common areas, was an early focus,” he explained. “We chose Genelec as a premium Scandinavian brand and we are incredibly happy with the results. We are getting positive feedback on the sound on a weekly basis. I’ve worked at many hotels but I can’t ever remember guests commenting on the sound quality before! That is really quite something.”