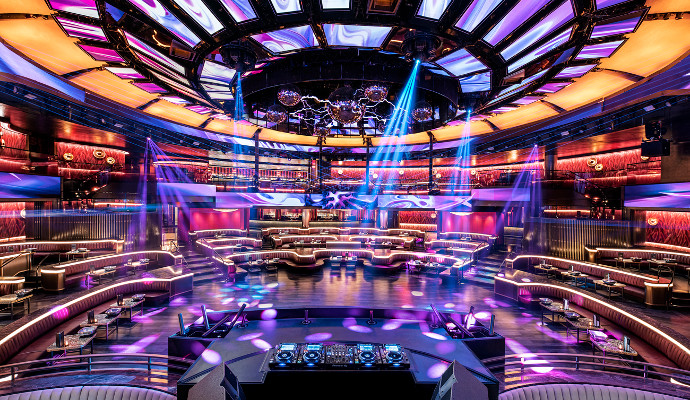 Kaos at the reimagined Palms Resort and Casino in Las Vegas has set a new standard in nightlife hospitality with what has been described as the most technologically advanced nightclub in the world.

At its heart, Funktion-One sound – specified and installed by National Technology Associates (NTA) and supplied by Coherent Distribution.

NTA’s Project Manager Nevin Edwards explained: “With a nightclub/dayclub, the set- up of the audio system is of prime importance. We knew Funktion-One would be a rider-friendly choice for DJs. We also knew that Funktion-One is installed in other venues across the city, and so the sound system here needed to be larger, better- sounding and louder than any other venue.”

“The nightclubs here are in a constant state of trying to ‘one up’ each other, so we needed Kaos to one up every other venue in Las Vegas.”

The entrance to the 73,000 sqft outdoor pool deck/dayclub is home to Damien
Hirst’s 23-foot tall sculpture ‘The Warrior and the Bear’. There are two main pools, various side pools, and 39 cabanas, most with their own private pool. 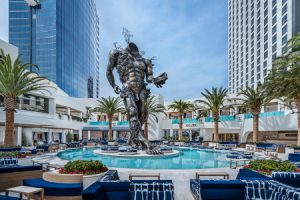 The dayclub, which can host around 6,000 people, features a seasonal dome cover that enables it to operate throughout the year. A second Damian Hirst structure – the bronze ‘Demon with Bowl’ – stands 65ft tall at the centre of one of the main pools.

The pool deck also converts into part of the 27,000 sq ft Kaos nightclub via a massive retractable glass wall and a rotating 360-degree DJ booth with stages on both sides.

While the visual elements of pool deck are bold and striking, the sound system was to be visually unobtrusive.

Coherent Distribution’s Todd Konecny said: “With global artists like Marshmello creating the party, the system had to be superlative at all points on the pool deck.”

“Funktion-One loudspeakers were a crucial part of achieving this goal and, because sometimes more is more, the system predominantly employs the upper tier of Funktion-One equipment like the Evo Series, and F124 and F132 subwoofers.”

The pool deck main stage is in the round and supports both DJs and live acts – often both on the same day. The system uses four (and a half) clusters of Funktion-One Evo 7E cabinets with additional Evo 6SH down and front fill to cover 300° of area around the stage. The main stage’s low frequency array consists of 9 x F124 bass enclosures and 2 x F132A subwoofers.

Indoors, Kaos nightclub is a study in sensory immersion, with the singular goal of transporting visitors to another dimension.

Here the sound system had to be exemplary in all respects to support a mixed programme of live acts and DJs. To achieve the ultra-high performance that the venue demanded, the main room has Funktion-One Dance Stacks built in to the walls flanking the DJ booth.

Konecny said: “Overall, the main room is unequalled with respect to its sheer power and ability to create an entirely enveloping aural experience with any music genre.”

“The system makes great use of Dante audio networking to support complex source switching between the various stages and for monitoring the system health.”

“The venue-wide network is a single backbone with an extremely high-bandwidth distribution scheme that allows audio, video, lighting and control to exist within the same domain for the ultimate in controllability and flexibility.”