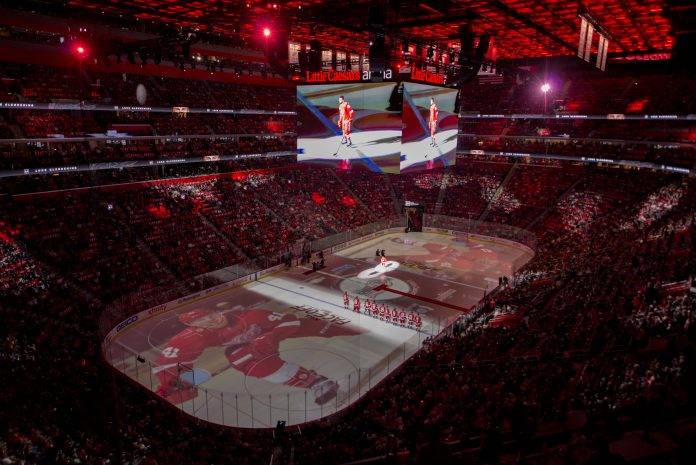 Little Caesars Arena has been hailed for its revolutionary design since it opened in September 2017, and disguise 4x4pro media servers play a key role in mapping dynamic video and graphics inside and outside the arena.

The home of the NHL’s Detroit Redwings and the NBA’s Detroit Pistons, Little Caesars Arena anchors a new sports and entertainment district downtown in the Motor City, USA. Its cutting-edge design features a bustling retail and business concourse linked to a bowl-shaped arena.

The project marked the first major fixed installation of disguise media servers by Crossfade Design, LLC, a video and lighting design firm with offices in Dallas and Louisville, USA.

“This was our first permanent disguise install, and it turned out fantastic!” said Eric Wade, Production Designer with Crossfade. Eric was part of the project leadership team for the arena build and is the Projection Designer for the arena.

“The scope of the job was so large and detailed that no other system at the time could do anything similar to disguise,” he noted. “It was the best option, and we were 100%  confident in it as well.  We did all the initial renderings and mock-up demo with designer Dave Maxwell, who was integral to the development and of the design and helped demonstrate for the client that this was a great way to go.”

Crossfade installed 3 disguise 4x4pros in the arena: 1 for the jewel skin wall on the upper concourse, 1 for projections onto the ice and basketball court, and 1 as a backup unit.

Eric pointed out that “the entire building is one big infrastructure. When the Redwings score a goal it triggers the lights in the parking garage and on the exterior of the building, the jewel skin wall display and the graphics on the ice. With disguise we can tie everything together as one surface. With the system’s numerous I/Os we knew we could handle this with no problem and supply full-on seamless backup.”

The unique, curved jewel skin wall stretches 600ft (182m) across the outer wall of the arena on the upper concourse. It is composed of thousands of dimensional metal panels, which serve as a display surface for 12 x 30K laser projectors mapped and blended using disguise.

The jewel skin wall showcases advertising messages – a Ford truck cruises down the length of the wall – as well as PIP images of game play and video and graphics content by Creative Lumens, Inc. in Chicago, USA. 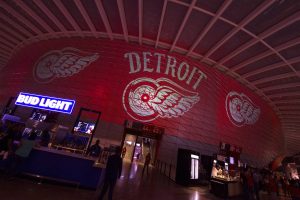 Sources include live cameras and a 10G video server; content on the jewel skin wall runs for all events from nightfall until midnight daily.

For Little Caesars Arena, “it was obvious that disguise was the only choice given the number of outputs needed and the networking capabilities required,” Brent Sandrock said. “The IT department can route the disguise network to any port in the building, and the ability to log in remotely from my computer is a big advantage. The QuickCal feature is always very useful for projection, too.”

During Redwings and Pistons games 8 projectors map the ice or the basketball court floor with bold graphics to entertain fans. National flags are displayed during the anthems, player intros amp up excitement, 3D animations ‘crack’ the ice, and an animated pinball game engages spectators.

“The operator runs cues off SockPuppet,” said Eric. “There’s really no limit to what you can do on these surfaces.”

Floor graphics were also used for the Kid Rock concerts that opened the arena. “Floor graphics can be used by any event in the arena – a corporate convention, music concerts – not just sports,” Eric explained. “Everyone on the arena staff cares about how the video and graphics look every day, and that’s a big contributor to the success of these massive displays,” says Eric.

Barry Otto designed all the projection system elements and was the video projection designer. Eric Wade was the overall Project Designer, along with his business partner Michael Nevitt.  Tyler Roach installed the disguise systems; Brent Sandrock and Zak Haywood programmed and mapped the media servers. Creative Lumens developed the raster to map content to the jewel skin wall and crafted some custom content to showcase the technology. 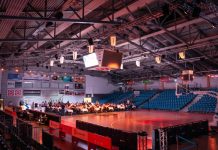 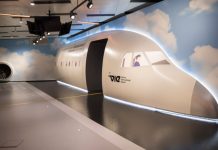 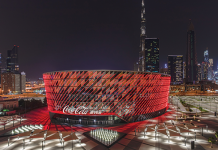