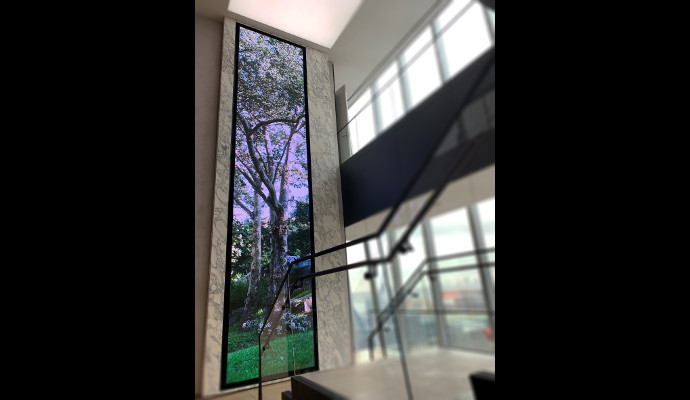 When Wells Fargo moved its Corporate & Investment Banking business in New York City to the new 30 Hudson Yards office tower, its traders were treated to one of the most unique lounge areas anywhere.

The seamless LED column displays beautiful, natural and urban scene – watching the content unfold is the perfect way to decompress away from the trading floors.

“Traders have such high-stress jobs and this secluded area near the staircase between the trading floors is meant as a place for them to lounge and relax before going back into the pit,” explained Dan Georgescu, Consultant with Robert Derector Telecommunications in New York.

Georgescu designed the technical solution for the space and worked closely with Analog Way, Leyard and Planar, RP Visual Solutions and HB Communications to deliver Wells Fargo’s vision for the one-of- a-kind videowall.

“The client and the architect had a vision for the space: to build a sense of extreme height and offer content that the traders would enjoy and that would promote relaxation,” Georgescu said.

“Once the architectural vision was in place we had to find the right technical solutions to suit the space and deliver the content.”

The Leyard DirectLight X LED Video Wall System with a 1.5mm pixel pitch was chosen to span the space in a configuration 29 feet tall by just six feet wide. “It’s a very unique shape and one of the tallest, if not the tallest, we’ve done,” said John Bailey, Leyard and Planar Regional Account Manager for New York-New Jersey metro area.

“The public really appreciates displays that step outside the 16×9 boundary to create a greater ‘wow’ factor.”

Leyard and Planar are “the market leader in fine-pitch LED,” he noted, but “building seamless LED videowalls at large sizes is always a challenge, so attention to detail is key.”

New Jersey-based HB Communications, Inc. was charged with the integration and building of the space, and its creative services team designed the custom content specifically to fit the unique shape of the videowall.

“The architects did a good job choosing the shape of the wall to complement the space,” said Vice President of Marketing Dan Barron, who was also the Creative Director.

In terms of content, however, “it’s easy to get nice portrait or landscape shots of the natural world, but we had to think about what would work for such a narrow strip of wall,” Barron explained. “We shot a wide variety of locations from New York City to Yosemite, San Francisco and Big Sur, California.

We used RED cameras to capture the 8K content, which was organized into two categories: city and energy, such as New York City’s new One World Trade Center, Ellis Island at sunset, Central Park and uniquely shaped structures; and nature and peace, such as the Golden Gate Bridge, Yosemite, Big Sur and Big Basin’s tall trees. Barron said,

“Although the videowall does not display 8K we shot 8K so when you pare the image area down to a narrow strip you still have enough resolution to look good at that huge scale.”

“We had to have enough vertical pixels to make sure we weren’t stretching the image to fit the wall,” echoed Georgescu. The custom 8K content was uploaded into Analog Way’s Picturall Pro media server where it was split into five 1080P feeds for the videowall controller to ingest and sync into one tall image.

“We had to make sure the system was 100 percent operational before Wells Fargo moved into the building,” Georgescu added. “To ensure that, we had the videowall up and running 24/7 for 45 days allowing for any ‘kinks’ to be vetted prior to the move in.”

Georgescu had worked on several previous projects with Analog Way, and Analog Way Regional Sales Manager Seth Teates was confident that Picturall Pro would be “a perfect fit” for the one-of-a-kind Leyard and Planar video wall.

“This project would have been beyond the capabilities of many servers, but it was right in our wheelhouse. Picturall Pro fulfilled all the requirements with headroom to spare.”

Teates gives kudos to the smooth coordination of the teams from Derector, HB Communications, Leyard and Planar and Analog Way that “worked so well together” to bring Wells Fargo’s unique vision to life.

“The space has turned into what Wells Fargo ultimately imagined it could be,” said Barron, a decompression zone filled with images of the big, beautiful world outside the trading floor.

Structuretone was the general contractor for the project and The Switzer Group the architects. RCI Communications worked under HB Communications to perform the physical installation of the mount and videowall. 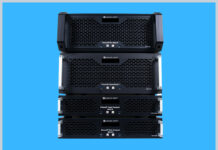 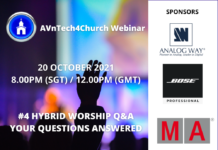 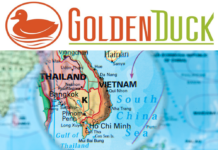